Oct 19 Comments Off on TMJ Treatment: Orthotics or Splints?

It can be confusing when trying to understand the different ways to treat TMJ disorder. Different approaches to treatment require different appliances-splints or orthotics.

Regarding the use of intra-oral appliances, there are 2 different approaches to treat TMD and both use appliances. I’m often asked “What type of splint do you use?

Dentists who treat TMD by occlusal adjustment or “equilibration” have patients wear a splint in between appointments. The splints are often named after the dentist whose approach to bite adjustment the dentist follows. The goal of a splint (worn usually on the top teeth at night but some are worn on the lower teeth (mandibular) such as the Tanner splint) is to calm the painful muscles of the jaw/face and allow the teeth to be “equilibrated” or adjusted to match the changes in the TMJ. This continues until the TMJ stops changing, usually taking several months.

Orthotics are used by those dentists who ascribe (and research supports) to the approach that damaged TMJ’s can be rehabilitated to normal or near normal motion, comfort, and stability while leaving the teeth as they were. I see it happen every day, as do my colleagues. Orthotics are proven to restore motion, comfort and stability in many cases without changes to the bite. There are several types of orthotics used for different joint conditions and some are also named after the dentists who introduced them. There are reasons that the bite may not align after rehabilitation of the TMJ, but most patients tolerate it well.

One orthotic I use often is a “pivot” or decompression orthotic. Placing it over the lower back teeth creates a “see-saw” action that reduces the compression in the TMJ. It’s initially used for painful joint compression or dislocated discs as it helps restore them back into position. As the joint becomes re-aligned the associated muscle tension from an arthritic, dislocated, or damaged TMJ is reduced or eliminated over 2-3 months. (Clinical observation of patients treated with pivot splint) It’s a simple appearing appliance. It requires adjustment to match the restoration of the joint. I have found over my 30 years of using it that it’s very effective but isn’t as effective for nighttime use as other orthotics.

The pivot orthotic is the “workhorse” of orthopedic therapy and often the initial appliance I use to begin the healing and repair of damaged TMJ discs and joints.

Myalgia orthotics are used to manage muscle pain in many types of cases. I utilize it most often in situations where patients need an appliance to calm down chronic muscle pain from a stable, arthritic joint. It is typically made for the lower teeth but can be used in some cases on the upper arch.

Myalgia orthotics are typically mandibular orthotics (lower teeth). In some nighttime applications it can be made to fit the upper jaw. It is sometimes called a “stabilization” orthotic. It can be mistaken for a “centric” splint but has different design features and purpose than those used to facilitate “equilibration” of teeth. 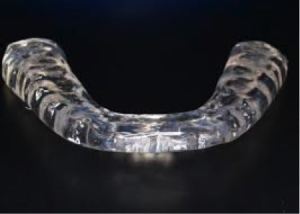 Research has shown that upper teeth (maxillary)night guards, and sometimes orthotics- but not as often, can exacerbate sleep apnea and other breathing disorders of sleep. If you have a maxillary nightguard and can’t tolerate it, or remove it during sleep, you have a likelihood of having an underlying sleep apnea/breathing disorder. Patients who report clenching harder when wearing an “upper nightguard” should also be evaluated for an underlying sleep disorder.

Schedule an appointment with our office to begin your evaluation for TMD treatment. Learn more about treating the source of TMJ disorder.