Mar 28 Comments Off on Sleep Disorder Categories and AHI 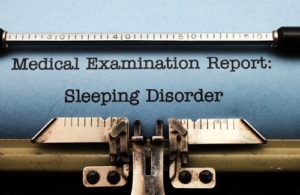 There are 7 categories sleep disorders as outlined by the American Academy of Sleep Medicine. One of those categories involves all the Sleep Breathing Disorders that Dentists treat under the prescription of a Physician.

Sleep Apnea and UARS (Upper Airway Resistance Syndrome – considered a variant or pre-cursor to sleep apnea) are what we will most often see oral evidence of. Benign Snoring is also under the Sleep Breathing disorders heading. Dentists cannot treat any sleep disorder, including snoring without a physician diagnosing it and writing a prescription for a Dental Sleep Appliance.

Sleep Apnea is scored by a number called the AHI, Apnea-Hypopnea Index. What is that?

Apnea is defined as not breathing for 10 seconds or more with a measured drop in the blood oxygen (the airway is completely blocked). Hypopnea is when the airflow of breathing drops by 50% (because the airway is partially blocked) and blood oxygen drops a certain amount. That’s what defines the AHI.

It’s generally considered normal to have up to 5 AHI’s per hour if you don’t have any other symptoms such as tiredness, heart or blood pressure problems, etc. in adults. If an adult is tired or feels unrested, then the sleep disorder is treated even if the AHI is normal. In children, ANY apnea or hypopnea is considered critical to treat, even grade 1. Their developing brains and bodies need full oxygenation with every breath. 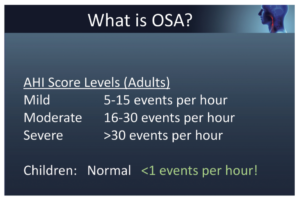 Urgency develops when we can’t breathe; our brain recognizes that something is wrong…a “fight or flight response” increases the heart rate, blood pressure rises, and anxiety will begin to creep in. That sense will increase as the apnea event lasts longer. Many apneic’s have events lasting 30 seconds or longer. Hypopnea’s cause the same physiologic response, it’s just not as dramatic.

Apnea scoring is tightly regulated for the scoring physicians and technicians, somewhat like periodontal disease. Probing 4mm without bleeding may not qualify for treatment. Same as OSA; An AHI of 5 without sleepiness may not be allowed to get treated. If the patient only stops breathing for 9 seconds, it isn’t apnea. If the oxygen doesn’t drop by 3% in a certain amount of time, it isn’t a hypopnea (partial apnea). Patients may have many non-qualifying breathing events that don’t get scored as sleep apnea. Yet they feel unrested, clench or grind their teeth, have sleep anxiety, etc. Those are the conditions that can be discussed with the sleep physician and have them prescribe a sleep appliance.

We sometimes see a mild sleep apnea worsen when patients start using an oral appliance. Why? They are sleeping better and go in the deeper stages of sleep where more apnea occurs. We screen for those clinical signs at regular follow up visits and have scheduled overnight pulse oximetry testing in our process. We can re-evaluate their mandibular position using pharyngometry and 3D cone beam imaging to assess how they are doing and whether a different jaw position is indicated. Throughout the process, we communicate with the patient’s physician to keep them informed about the process.