Sep 30 Comments Off on Are Otologic (Ear) Symptoms Caused By TMD?

In a research study this month, ear symptoms predicted

TMJ/TMD problems almost better than having jaw pain. Ear symptoms are more predictive of a TMD (Temporo Mandibular Disorder) than an ear problem in this study. 100 random patients reporting to a medical clinic for these symptoms in descending order were examined for TMD; 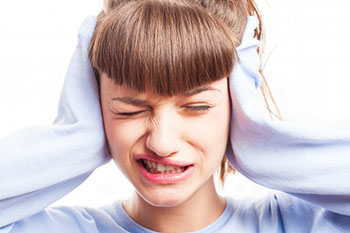 Patients with one or more of these symptoms were found to have TMD in 92% of the cases. The TMD was responsible for their ear symptoms. As in most studies, women had more severe TMD (93%) than men (66%), but it wasn’t as big of a spread as thought.

Once TMD was identified in these patients, researchers asked what other symptoms the patients were having that were more relevant to TMD. That broke down as:

In nearly 3/4ths of the patients, any/all of the symptoms were intermittent. The other 1/3 had one or more symptoms constantly.

Clenching and/or grinding was present in nearly all patients when questioned.

Pain in and around the ear is very common in TMD. It’s often difficult to determine the exact location because the TMJ is right in front of the ear.

TMJ problems can contribute to ear problems and ear problems can manifest as TMJ area pain. There is a common nerve (auriclulotemporal) between the ear and TMJ that originates in one of the large sensory nerves to the jaw and its muscles (Trigeminal) that makes it hard to differentiate pain sources. Muscles of the jaw/TMJ can trigger spasms or tension in the inner ear muscle that can give a sense of fullness or sound distortion. The TMJ also lies just millimeters in front of the ear canal and if the TMJ is misaligned it can put pressure against the wall of the ear, causing pain and other symptoms.

If you have ear pain or symptoms and your physician doesn’t find a problem in the ear, it is highly likely you have a TMD (Temporo Mandibular Disorder). It’s not likely your Dentist will identify a TMD, due to a lack of training in dental school. Seek a Dentist who specializes in TMJ/TMD problems with an orthopedic approach, rather than a “bite” approach, for accurate diagnosis and treatment.